by Jack The Hustler & Mr Kavalicious 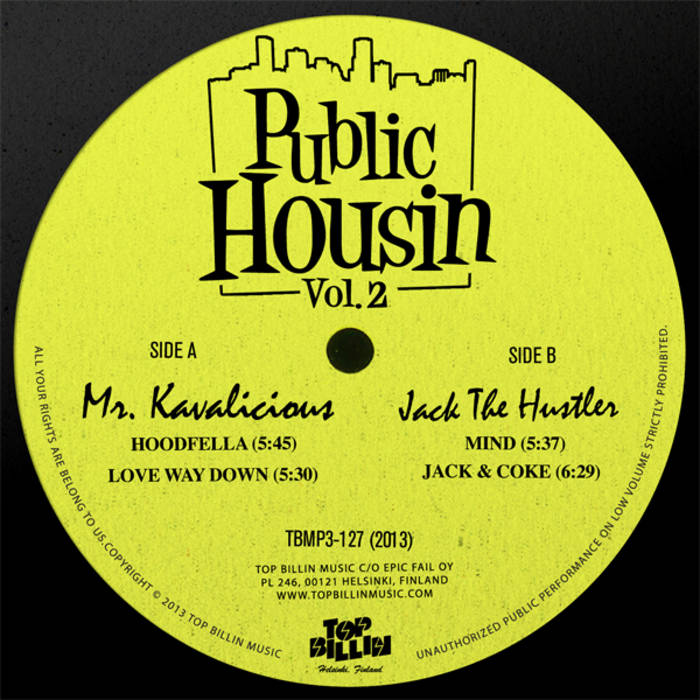 House music makes you lose control. This is the second edition on our Public Housin series, a release with 4 tracks of wonderful house sounds from a Finnish duo Jack The Hustler (Overcooked, Slime Recordings) and UK's Mr Kavalicious (Street King US, Solid Ground Records). House music is going through a great revival and it's as popular again as it was in it's golden days in the 90's, and we want to celebrate that and set up a series of releases showcasing different styles of house vibes aka Public Housin.

Jack The Hustler are two electronic music producers/DJs/brothers from Tampere, Finland. With support from key players such as Crookers, Toddla T, DJ EZ, DK (Ninja Tune), Lorcan Mak, Tomb Crew amongst many others. Alongside this, Jack The Hustler got invited to appear as a guest for the first show of 2012 on Ninja Tune's Solid Steel Radio Show alongside Bonobo & DK. The brothers describe their sound with flavours from bass, tropical, and tech house. Their tracks are purely made for both, destroying the dancefloor with their syncopated beats and relaxing the day after with the melodic touches of their tracks. Now having made their trademark sound and name for themselves, their tracks have appeared on radios from BBC Radio 1 to Rinse FM, Sub FM, Nasty FM, Unity FM, Solid Steel, and to magazines & blogs such as XLR8R Magazine, Soundplate, UK Garage.org, amongst others.

Mr. Kavalicious has been stirring up some serious support lately in the London underground house scene with his signature funk house sounds. Mr Kavalicious is a self-described spiring underground house artist, clubbing enthusiast and all round joker from London, UK. As a supporter of the old school and the underground, he likes his sounds deep, warm and with a 90's twist. With releases on labels like King Street US, Solid Ground and Charmed Life, and support from people like Ben Mono, Groove Assassin, Hanna Hais, Yoshi Horino, Vinny Da Vinci. His signature mix series 'Deepalicious Club Mixes' are also a great look into this guys brain on house music.

Yet another great house music release from Top Billin, Public Housin is the name of the game.